Posted on January 9, 2014 by scottandjody

This is our seventh day in Costa Rica, and all is well.  One of the differences we’ve noticed is a preoccupation with physical security.  Businesses and homes have an ever-present air of watchfulness due to guards, walls (paredes), barred windows, doors (puertas), gates (portones), and locks.

Here is a picture of the facade of a nearby street showing the outside walls and gates. 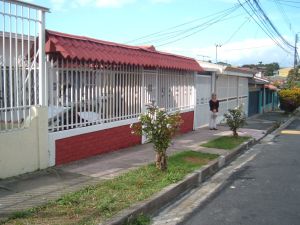 In addition to bars on all windows, many houses also have razor wire on top of the walls. 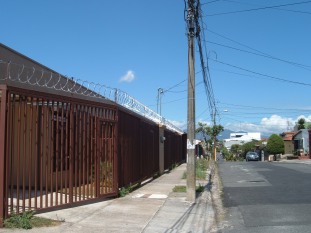 The home where we are staying is a good example.  Even while at home, doors are locked and the alarm system is on (the alarm is triggered if the door opens).  To leave we have to:

Entering the house requires substantially the same steps in reverse, except that only 30 seconds are allowed after opening the door before the alarm system goes off.  Here are pictures of the outside locked gate and the gate and door to get into the house; note also the bars on the windows in the second photo: 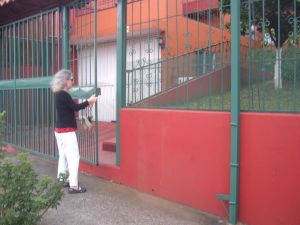 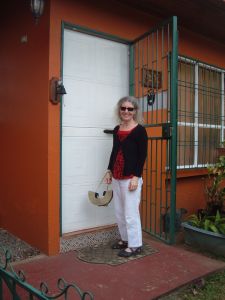 Scott and Jody have been married for 41 years and have six adult children and four grandchildren. Scott worked as a CPA for over 32 years and Jody was a homeschooling mom. They are now serving as missionaries in Quito, Ecuador with Reach Beyond (formerly HCJB Global).
View all posts by scottandjody →
This entry was posted in Costa Rica and tagged Costa Rica. Bookmark the permalink.