For me (Jody), posting on Facebook is so much easier than blogging, so you can guess what I do when I have some random happening to share!  So I’m going to cheat and use some of my Facebook posts and photos to catch up the blog.  My apologies to Facebook friends who have seen all this before.

New Year’s eve in our new apartment. First night here. Fireworks outside but Scott was up at 4 a.m. for an inventory observation and he’s sound asleep.

And we’re moved! Out of the housesitting apartment and into the new apartment–we’re really blessed.

Well, that was a decisive win. Listened via internet to the first half (of the Rose Bowl) and then watched via Skype & listened via internet for the second half. The internet was about 90 seconds behind the TV, so it was a bit challenging at times. And chatted with Vjera Thompson during commercials. Fun!  (University of Oregon Duck football win against Florida State)

We’re back from a weekend trip to Papallacta, where it was cold and rainy and windy, although with big, steep, green mountains. A bit like the Oregon coast in weather and green, only the mountains were on a larger scale. So chilly it was hard to believe it was the same country. Our bare-bones guest house had a hot springs right outside the door–wonderful! And so quiet. But it was nice to get back to Quito’s warmth and sun.

It’s Friday night and the first real rain in about 1-1/2 months here in Quito. The traffic is insane. At 9 p.m. our little street is jammed with cars and trucks trying to avoid the major road a block away. Honking horns and revving engines. I’m glad every night isn’t like this!

My Spanish tutor just told me she has gotten a coveted full-time position (for six months) teaching Spanish to Peace Corps volunteers. Great for her, not so great for me–she was fantastic. Do I have the discipline to study Spanish on my own without a tutor? Can I find some conversation partners? On the positive side, an Ecuadorean friend from Bible Study Fellowship is picking me up in a few minutes and taking me to her house so I can teach her to make my Overnight Rolls. So I’ll get lots of Spanish today.  (I have been studying on my own, but still really miss my tutor.  Still praying for some conversation partners.)

Quito friends, I want to buy a used bike, mostly for Ciclo Paseo on Sundays. Doesn’t have to be fancy, just functioning and hopefully enjoyable as I try to keep up with Scott on his big-wheel unicycle. For non-Quito friends, Ciclo Paseo is from 8 a.m. to 2 p.m. every Sunday, and half of a major road is closed to cars for about 20 miles through the length of the city. Very fun!  (We’re still looking for a bike for me.)

I love my husband. He’s off to at least one hardware store after looking up the Spanish words for plug, wire nut, hanging lamp, electrical wire, etc. Of course, the dictionary words might not be what the locals use, and then the pantomime or descriptions start. But he’s enjoying the adventure–what a guy!

Chiggers; they’re what’s new in our lives. Not from Quito, but from a weekend trip to Mindo and beautiful grassy forest trails. I won’t share photos, but they really like feet and ankles.

Grumble, grumble, this is day 10 of a head cold that zaps my energy in the day and keeps me awake coughing at night. I know it’s only temporary and really just a minor thing in the world of illnesses, I’m just very ready to feel like myself again! Prayers are appreciated for a good attitude and the wisdom to know when to rest and when to “do.”  (This cold did finally go away after another week; I was very thankful.) 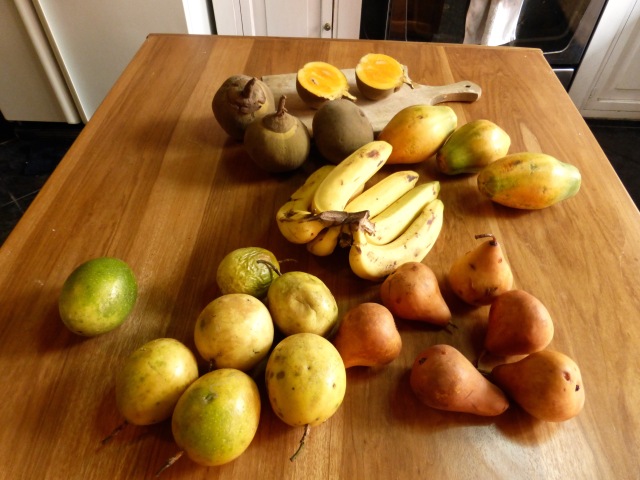 There are fruit vendors who drive their pickups up and down streets blasting out a recording that probably says something like, “fruits for sale.” I haven’t had the courage to stop them to buy fruit–it’s much more intimidating than the grocery store. But today my courage was high and I waved one down. Here’s my haul (clockwise from top left): zapotes (for eating 4/$1), Hawaiian papayas (3/$1), pears (6/$2), maracuyas (for juice, 7/$1), and bananas in the center ($.50/bunch). The (female) vendor was super nice, didn’t laugh at my Spanish, and I didn’t have to haul it up the hill in my backpack! (Quito friends, I don’t want to know if I paid too much, ok? Let me enjoy my small victory over timidness.)

Learning Spanish is for me a very slow process. Yesterday I was very discouraged. I know I am improving, but it’s hard to see. BUT today at the grocery store standing in a long slow checkout line, I chatted with the lady in front of me (who had lived a number of years in Miami) and the couple behind me (23 years in New York) and they each complimented me on my “good” Spanish! (Their definition of “good” was that they could understand me.) And at the fabric store, a lady who spoke NO Spanish asked me to help her explain to the clerk what kind of fabric she wanted, and I did! Yay! It’s all relative, isn’t it? To her my Spanish was fantastic. Gracias a Dios for encouraging moments.

Scott & I experienced a Secret Church simulcast for the first time last night, thanks to the organizing efforts of Sydney Drinkwater. Challenging and well worth the time. The prayer focus this year was on the church in Vietnam, which made me think of Narda Person and other friends with connections to Vietnam.

That’s all for now. I didn’t include three anniversaries (Vjera & Eddie, Scott & me, Luke & Bethany), two birthdays (Luke & Max), six days of an Artistic Challenge with lots of quilt photos, and several posts about a disaster relief team from our organization (Reach Beyond) who have been in Nepal since three days after the big earthquake.  For all those posts, you need to read my Facebook.

Scott and Jody have been married for 44 years and have six adult children and four grandchildren. Scott worked as a CPA for over 32 years and Jody was a homeschooling mom. They have been serving as missionaries in Quito, Ecuador since 2014.
View all posts by scottandjody →
This entry was posted in Ecuador, Quito and tagged Ecuador, Quito. Bookmark the permalink.