A “ciclo” in Costa Rica is a bike shop.  The proprietor is Edwin Madrigal and Scott spent a lot of time there the last six months practicing his conversational Spanish. 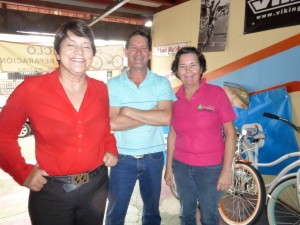 This is Edwin with his sisters Irene and Alejandra:

This is a good view of the inside of the ciclo:

Here is a view of the ciclo’s remodeled bathroom:

San José city ordinances mandated that the ciclo’s bathroom be handicapped accessible, even though his customers don’t actually use the bathroom.  Before the expansion and modification, the ciclo had a tiny toilet below the stairs (behind the small door on the right with the “men’s”symbol).  When Edwin remodeled the bathroom, he rotated the toilet, moved it to the left, added a sink, and installed the door on the left (with the “ladies” symbol).  He left the door on the right because it would have been extra work and extra cost to remove it.  If you open the door on the right all you see is the toilet (from the side).  Scott thought it would be humorous to put “ladies”and “men’s” symbols on the doors.  Then, if a male customer ever used the “facilities,” it would be fun to watch their reaction when they opened the door and tried to figure out what was going on!

Here is Susan, Edwin’s 14 year old daughter, and her uncle “Cucho” (Jorge) moving the bikes from the display area to the back of the ciclo:

Because the ciclo is Edwin’s sister Irene’s garage, every night at 5:00 the bikes are wheeled to the back and the display counters are rolled to the side so that Irene can park her car in her garage.  If you look carefully to the left of the televisions and on top of the shelves with the tires you can see some of Edwin’s cycling trophies from his years racing as an amateur cyclist.

Edwin had fun showing Scott some of his training routes and Scott enjoyed the exercise and getting to explore some of the beautiful Costa Rica countryside.  Here is Edwin at 6:00 a.m. one Sunday morning before leaving on a ride with Scott:

And Scott and Edwin taking a break on one of their rides:

Here are a couple of panoramas from rides:

The ciclo was an important part of Scott’s life during our stay in Costa Rica.  It is long reading, but if you are interested in the full story, read on:

The “ciclo” was Scott’s favorite hangout for Spanish conversation, relaxation, and (sometimes) fun.  Scott first met Edwin because a classmate at language school (Brian) had bought a bike from him and Brian had told him that Edwin was very friendly and willing to talk to “gringos” (Americans).  The ciclo was about a third of a mile from our house and was on the way to “Polideportivo” (a small athletic complex that has a track where Scott liked to ride his unicycle).  On days he rode he would stop by the ciclo to say hi and talk to Edwin.  And other days Scott would simply walk down to the ciclo to spend time.  All told, Scott probably spent at least 5 -10 hours there each week.

For Jody’s second trimester of classes at the language school, she had a language route with planned conversations with local business owners twice a week.  Edwin and the ciclo was a natural place as a stop on her language route so Jody spent time there as well (but not as much as Scott).

Customers come in to the ciclo to purchase parts and accessories, have balls filled with air, get flat tires fixed, and have bicycles repaired and reconditioned (Edwin is an amazing mechanic).  This time of year (January to August) Edwin rarely sells bicycles.  In fact, for about three months Edwin didn’t have any bicycles to sell.  That changed in late April when a shipment of used bicycles finally arrived from the U.S. and Edwin was able to purchase about 20.  He quickly cleaned them up and reconditioned them and put them on display in the ciclo (the rest are stored above the ciclo/garage).  Edwin says that it is hard to sell bicycles during the “winter” (it’s rainy season in Costa Rica, which is also the coldest time of the year); instead, Edwin will likely sell the bicycles in December after employees receive an extra month of wages (mandated by  Costa Rica’s labor laws)!

Scott and Edwin had a connection because of cycling – and perhaps because they both have a quirky sense of humor.  There was inevitable talk of cycling and lots of kidding and laughter as the gringos practiced their Spanish and Edwin (and family and friends) patiently corrected us and tried to explain Costa Rican words and customs.

Edwin was a competitive amateur cyclist for about 10 years.  He is now 50 years old (long retired), but has many buddies from his cycling years.  He was one of the top cyclists in Costa Rica and competed in the “Tour de Costa Rica.”  He was on the team to race in France, but was dropped at the last minute because he refused to take drugs.  The ciclo has posters of his races and many trophies from his years of competition.  Because unicycling in San José is dangerous (lots of cars and motos, traffic lights, bumps, and potholes), Scott soon discovered that bicycling on weekend mornings was a way to get to know Edwin and his friends, have a great workout, and explore the countryside.  Edwin is a patient teacher and greatly enjoyed schooling his new cycling friend on how to shift gears and then techniques of long distance riding – especially mountain ascents (whenever you leave San José the direction is up!).  Here is a poster of Edwin crossing the finish line in one of his races: 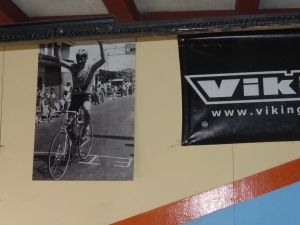 Edwin has lots of family and friends.  He is one of 10 children and Scott met five of his siblings: (1) his sister Irene who owns the house that houses the garage that houses the ciclo, (2) his brother Jorge who owns a small business that sells compressors; Jorge stops by almost every day on his way home from work and usually spends all day Saturday at the ciclo, (3) sister Alejandra who lives next door to Irene, (4) brother Alejandro, and (5) brother Gustavo.  We’ve also met Edwin’s wife, Lucía and their daughter Susan.

Susan is a delightful young lady.  She is an excellent student and enjoys playing acoustical guitar.  A few weeks ago she was invited to AMCA house, a local Christian ministry that reaches out to teens and adults, many that are English speaking or wish to improve their English.  Susan, who speaks some English, was warmly received and immediately fit in.  Edwin was very impressed with how they accepted her and also that the Bible and God are part of their meetings.  AMCA house recently took a “summer” break (they use the same calendar as schools in the U.S.) and Susan has been lamenting that there are no weekly meetings at AMCA house.  She can’t wait until meetings start again in October.

It was “family and friends” because there were lots of family and friends that came there.  Some of the friends who regularly stop by are Oscar, Kuky, Fabio, Juan Carlos (Charlie), Enrique, and Alexis.  Here is Edwin (sunglasses), Kuky (on the right) and a couple of friends:

Besides much conversation, there are often spirited games of “damas chinas,” a variation of checkers that is more lively because kings can move any number of spaces and change directions during a move (kind of like the queen in chess except on steroids).  Scott mostly watched (or kibitzed) although he occasionally played.  At first he always lost.  Later he almost always lost, but is happy to say that he sometimes forced draws and won two or three times!  This is Edwin playing Alexis (note the board (a piece of sheetrock) and the playing pieces (bottle caps)):

When it was finally time to leave Costa Rica and travel to Ecuador, we experienced both sadness and anticipation.  Sadness at leaving friends who we had come to love and appreciate.  And anticipation at finally getting to Ecuador where we believe God has planted us and where we will find new friends.

Scott and Jody have been married for 43 years and have six adult children and four grandchildren. Scott worked as a CPA for over 32 years and Jody was a homeschooling mom. They are now serving as missionaries in Quito, Ecuador with Reach Beyond (formerly HCJB Global).
View all posts by scottandjody →
This entry was posted in Costa Rica and tagged Costa Rica. Bookmark the permalink.