I (Scott) recently had the opportunity to fly into the jungle of eastern Ecuador with a Reach Beyond work team that is helping a small indigenous community build a water system.  Instead of carrying impure water from a nearby river, the community will have clean spring water piped to stations outside each dwelling. 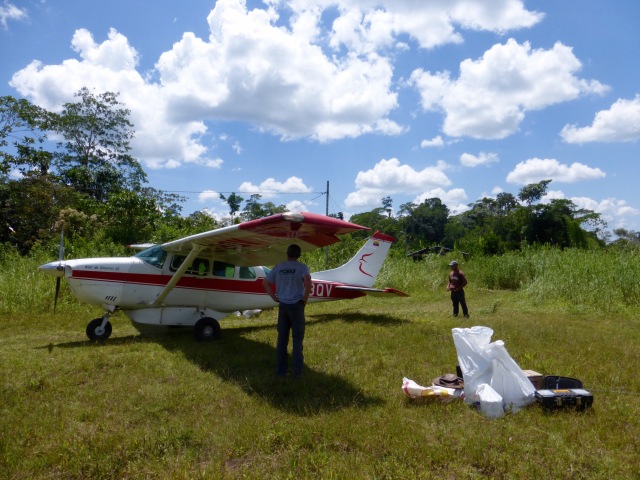 Unloading the aircraft (Eric and Pedro)

The system will be solar and gravity powered – a small solar-powered pump will raise the water into two 2,500-liter tanks sitting six meters atop a wooden tower.  Reach Beyond is there by invitation, providing resources and expertise, with community members doing the great majority of the work.  Since it is a community project, not a government or Reach Beyond project, we expect it to be well-maintained and last for many years.

Aerial view of the community, the tower, and the spring

The path to the spring; the structure is where the solar panel for the pump will go.

Although primarily an office worker in a city of more than two million people, I asked if I could accompany the small Reach Beyond team (Eric Fogg, a fellow Reach Beyond missionary and Pedro Llallico, an Ecuadorean contractor) as a manual laborer on a four day trip into the selva (the Spanish word for jungle).  Our team and construction supplies were ferried into the jungle in a small plane by Alas de Socorro, which some of you may know as MAF (Mission Aviation Fellowship).

Scott and others working on the tower.

For several days we worked alongside community members, we ate and took breaks with them, we walked to the spring to bathe each evening, and we slept in “bug huts” on the floor of their community building.  We endured what many North Americans would call hardship, but we also enjoyed the tranquility and beauty of the Ecuadorean jungle. 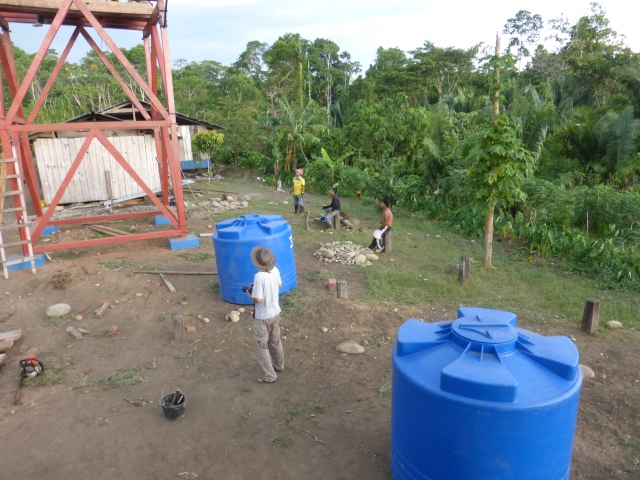 Eric and workers assessing the progress.

All the floor beams are finally up! (Daniel, Juan, Patricio, & Pedro)

Children playing next to the tower 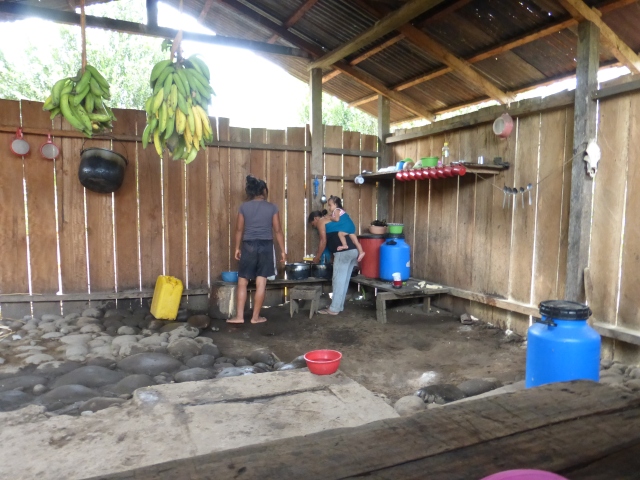 Thank you Lord for the beauty you have created, your provision for our physical needs, and your great love for all peoples.

How Can You Pray for Us? 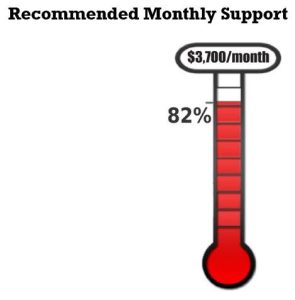 THANK YOU to all of you who pray and give so we can serve here!

Touch the Sky (Toca el Cielo), Scott’s hike up and down Pichincha

The tower before our work on this trip 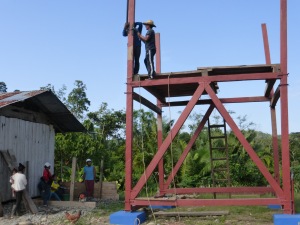 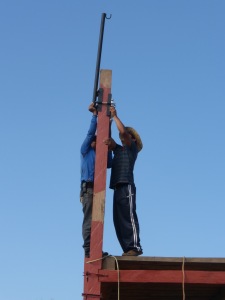 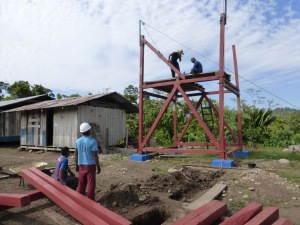 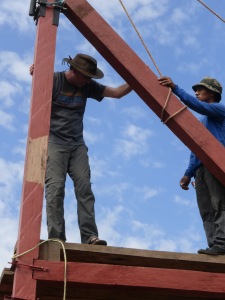 Eric and Pedro planning what to do next

Daniel measuring an angle before cutting

Daniel and Pedro contemplating the next step

Securing the upright beams before removing the jungle come-along 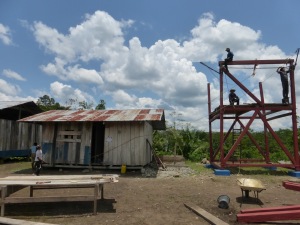 Pedro, Daniel, and Eric while hoisters (at left) await the next move

The beams were all cut with this chainsaw/a common position for Pedro, Daniel, Eric, and Eddison 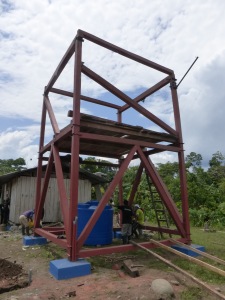 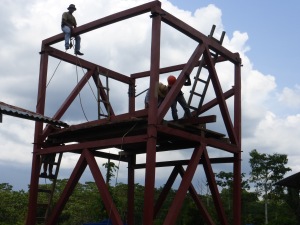 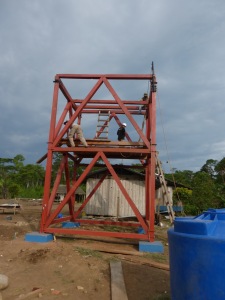 Working on the upper storey

Moving the second level to the upper level

Starting the floor of the top storey 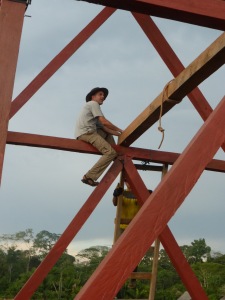 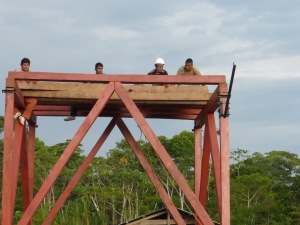 Rolling the floor beams into place 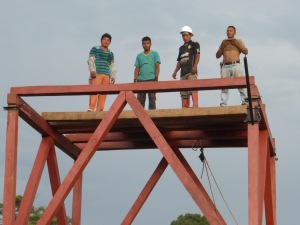 All the floor beams are finally up! 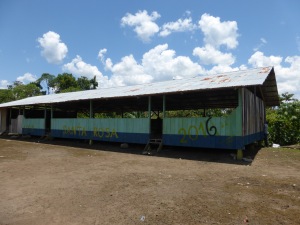 Community building where we slept and ate 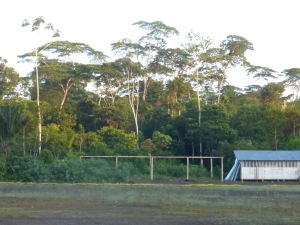 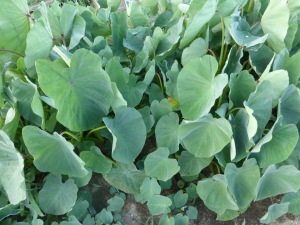 Jungle vegetation – guess what it is! 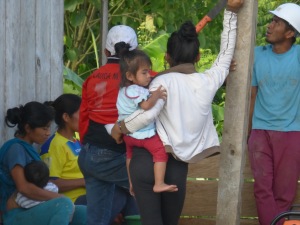 Women and children (and Juan) 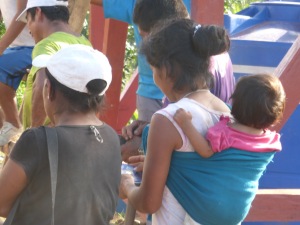 Some women look on 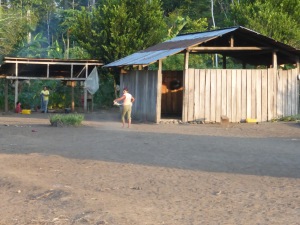 Daniel was an expert fisherman as well as construction worker 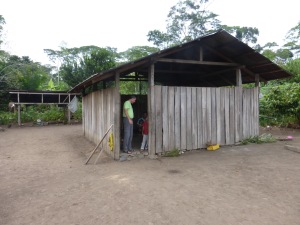 Donate via our blog or send check to:

Please make payable to Reach Beyond and note Account #110563 on memo line.

Scott and Jody have been married for 44 years and have six adult children and four grandchildren. Scott worked as a CPA for over 32 years and Jody was a homeschooling mom. They have been serving as missionaries in Quito, Ecuador since 2014.
View all posts by scottandjody →
This entry was posted in Ecuador, Missions and tagged Ecuador, Missions, Newsletters, Reach Beyond. Bookmark the permalink.