Two weeks after our April 16 earthquake, the disaster zone on the coast is starting to see some signs of normalcy.  Some gas stations have gas, some grocery stores have food and supplies, some destroyed buildings have been leveled.  All the small villages have been reached with initial emergency response of food, water, shelter, and medical care.  Major roads are being patched.

My (Jody) first-hand knowledge of the emergency response is through the reports of teams we (Reach Beyond) have sent out and also through the announcements and activities of the church we attend (Iglesia Dios es Fiel–God is Faithful Church).

Reach Beyond sent a medical response team of four doctors during the first week for five days.  A second team of two doctors, an EMT, and an engineer went for eight days, returning two days ago.  For the first few days, this team was joined by a second team of pastors and counselors, with the special mission of counseling traumatized children.  All of these teams were a combination of Ecuadoreans and expats (foreigners who live here).  The second group worked under the direction of the national health department, going to both isolated villages and also refugee camps close to large cities. 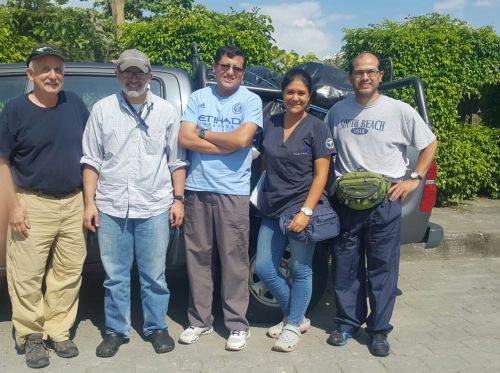 Reach Beyond’s plan is to continue sending medical teams as long as they are needed, and also to plan for other long-term help.  Which communities would be good locations for clean water projects?  Which churches do we already have relationship with which could utilize a work team?  The idea is to partner with the local church and community; Reach Beyond provides what the community can’t and the community provides what they can (primarily labor and administration).  It’s a model that builds community ownership and self-sufficiency while minimizing continuing dependence on outside  help.

The evangelical churches of Ecuador have formed a disaster committee which is assigning different sectors of the earthquake zone to individual large churches or groups of smaller churches.  This is both for immediate, emergency help and also for rebuilding and restoration.  Our Spanish isn’t good enough yet to understand all that our church is doing, but we know that last week our church sent food and supplies to an orphanage.

Besides the physical destruction and the human suffering on the coast, the emotional and spiritual impact on the country has been remarkable.  The whole country hurts for the coast.  The outpouring of prayers, donations, and volunteers is overwhelming.

I’ll try to put it in context:  imagine if Oregon (almost exactly the same size as Ecuador) were a nation and had over 15 million people (instead of Oregon’s just under four million). Imagine large extended families with strong ties throughout the country, a nation where community is very important.  Imagine a massive earthquake hitting the coast, killing 660 people, leaving over 22,000 homeless, and destroying 70 or 80% of the buildings.  Beyond homelessness, the destruction would  devastate the tourism industry and thus the coastal economy.   Almost everyone would know someone who died, was injured, or lost their home and/or business.

Thank you for praying.  Please continue to pray for those who are suffering.  Pray for wise and well-coordinated assistance from all the help that is here.  And pray that the body of Christ here in Ecuador will bring glory to God and many will follow Christ and gain eternal life.  Earthly life is so fragile; we need to be ready to die.

Scott and Jody have been married for 42 years and have six adult children and four grandchildren. Scott worked as a CPA for over 32 years and Jody was a homeschooling mom. They are now serving as missionaries in Quito, Ecuador with Reach Beyond (formerly HCJB Global).
View all posts by scottandjody →
This entry was posted in Ecuador and tagged Earthquake, Ecuador, Reach Beyond. Bookmark the permalink.