Reach Beyond’s disaster relief teams listened to many survivors tell their stories, but a very special story was told by Marianita in Canoa.  She and her husband, Melecio, were long-time friends of several Reach Beyond missionaries who asked Team #2 to search for the family while the team was in Canoa.

The second day of searching, April 27, Hermann Schirmacher, a Reach Beyond missionary, was able to find Marianita.  In his words:

“A man standing next to us, who listened to our conversation said, ‘I know the lady, Marianita; she lives just here around the corner.’  We both jumped into the car and it was just two blocks from our hotel.  There she was at the house of her daughter Rocio and rested in a plastic chair. Her left arm was covered with ace wrap.

“I presented myself and did talk to her. She had never seen me before, but once I said that I was from HCJB and was sent by Chuck and Anita Howard to look after her and I told her that they have been praying for her, she stared at me with big eyes and tears ran down her cheek.

“I grabbed her swollen hand and prayed for her and her family. 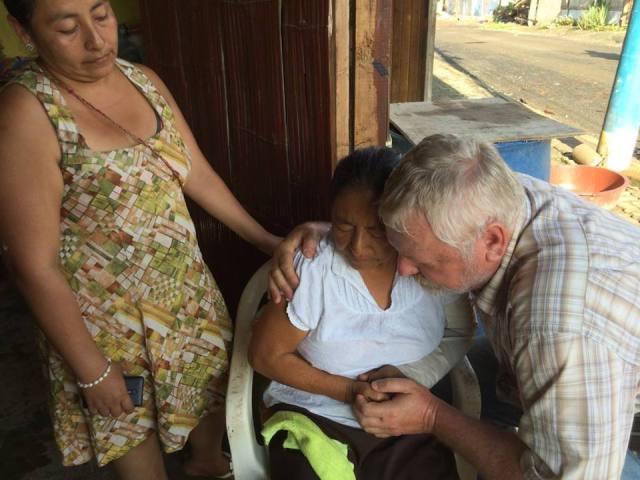 It was heartbreaking to listen to her story and how things happened. She was buried for a day under the building they rented for the church to worship. Her husband, her three sons, a son-in-law and her granddaughter were killed.

“Her granddaughter was asking for help and she only could encourage her and she both talked and prayed to the Lord for help. Many hours later she could not hear her voice anymore. The cell phone under the gravel started ringing and she asked her to answer the phone. But nobody answered the phone at all.

“‘I don’t know why this happened to me and why I am still alive,’ Marianita said. ‘Maybe the Lord wants me to be a testimony to the world. I don’t know. ‘

“I encouraged her and said that we would come back and I would bring our doctors over to look at her. She was very thankful and appreciated the visit.”

Later that day the team provided medical care and took her to the nearby Samaritan’s Purse hospital.  Marianita was very worried about surgery, but once she learned she wouldn’t need surgery she was off the exam table and witnessing to other patients.

Thank you for praying for the earthquake survivors and for the long process of rebuilding and restoration.  Thank you for helping us be here, helping however we can.

Scott and Jody have been married for 44 years and have six adult children and four grandchildren. Scott worked as a CPA for over 32 years and Jody was a homeschooling mom. They have been serving as missionaries in Quito, Ecuador since 2014.
View all posts by scottandjody →
This entry was posted in Ecuador and tagged Earthquake. Bookmark the permalink.