The end of May we went to a wonderful missionary getaway in Guayaquil sponsored by the Christian Hospitality Network (CHN). A mission team from Tennessee pampered us (and 160 other missionaries) in a five-star hotel for four days—what a treat!

CHN promotes hospitality in the U.S. and also sponsors getaways outside the U.S. for missionaries close to their field of service.

CNH was started around 2002 by Paul & Jean Cowell. Jean was at our getaway (Paul is now deceased) and she told us of the beginnings of CHN. She and Paul had opened the Whitestone Country Inn in 1997, and they welcomed missionaries to stay at their inn at no cost. One night they hosted a missionary couple from Russia and showed them to their room, the best in the inn. The wife sat down in a chair and started crying, saying, “You don’t understand; we’re missionaries, we don’t get to stay in the best room.”

Jean and Paul started dreaming of taking the Whitestone Inn experience to the mission field and giving missionaries four days of first class rest and relaxation. Since 2002 CHN has hosted 22 getaways around the world, and we were blessed to have one this year in Ecuador. Our only costs were transportation and our lunches. The team included  medical staff, a hair stylist, a photographer, counselors, a worship team, and a group to run kids’ activities, all who came at their own expense.

On our application they had asked for names of two or three people who could provide some special information about us. They then secretly contacted these people and asked them to organize cards and letters from family and friends which would be given to us during the retreat.

So the second night as Jody was getting ready for bed, she saw a stack of over 30 cards and letters on the spare bed in their room. “What are THESE?”  Instead of going to bed, we spent the next hour reading the cards to each other. What a sweet surprise of blessing and encouragement.

Guayaquil is a seaport and Ecuador’s most populous city. Sights include an iguana park, a waterfront walk, and a lighthouse on a hill across from our hotel. The views of Guayaquil were taken from the lighthouse.

At the iguana park

At the iguana park 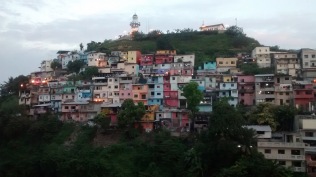 The view from our hotel room

Scott and Jody have been married for 44 years and have six adult children and four grandchildren. Scott worked as a CPA for over 32 years and Jody was a homeschooling mom. They have been serving as missionaries in Quito, Ecuador since 2014.
View all posts by scottandjody →
This entry was posted in Ecuador and tagged Christian Hospitality Network, Travel. Bookmark the permalink.