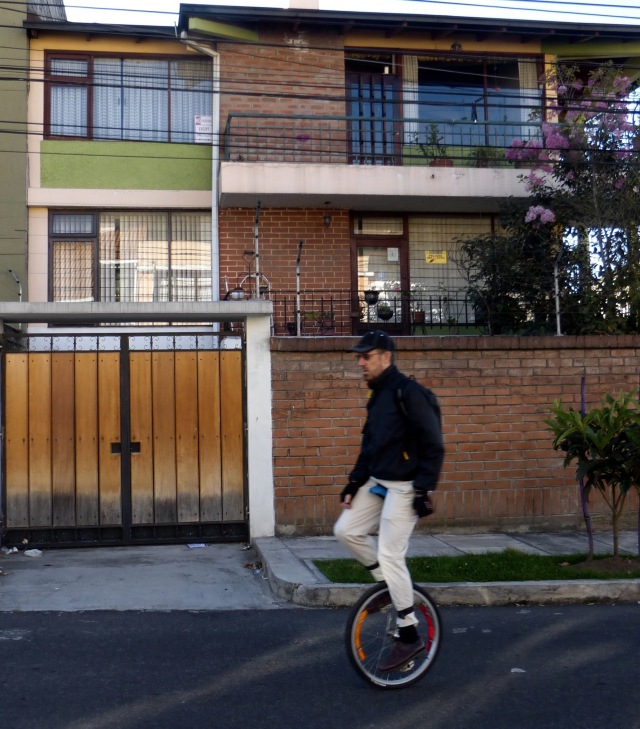 Scott heading off to work. Our apartment is on the top floor.

Scott’s work commute is by unicycle, certainly an unusual sight here. Why does he unicycle? First, because he enjoys it. But, second, it helps him connect with people and is a conversation starter. It’s a way for us to “move into the neighborhood,” as Christ did when he came to earth.

Scott has introduced himself to many of the people he sees every day on his two-kilometer route: neighborhood guards, parking lot guards, people who watch over cars parked on the street. In addition, when people from the neighborhood talk to us, the first comment is usually about his unicycle.

Recently he introduced himself to a new guard at a government building. He told the guard where he worked, and because HCJB/Reach Beyond has such a long history here, the man knew he was a Christian. A few days later, the guard waved him down and said, “I’m a Christian too and I want to learn more about living like a Christian. Can you help me?”  What an opening!

A good friend who is a Ecuadorian pastor and a former Reach Beyond missionary told Scott, “Give him my contact information; I can meet with him,” then added, “You’re an evangelist!” Well, yes, sort of, in his own quiet (unicycling) way.

Thank you for sharing in our adventures—we are blessed and thankful to be here.

Two days after we wrote the above, Scott took a minor tumble on his unicycle and managed to break his collarbone. He’s in a sling for at least three weeks but is continuing to work (one-handed). We’re thankful he didn’t do this three months ago when Jody was wearing a sling after shoulder surgery.

In Case You Were Wondering

A friend recently wrote us, “I would not be honest if I said I was happy you have denounced your USA citizenship.” And we thought, “Wow, we didn’t explain our resident visas very clearly, did we?”

To clarify, we are still U.S. citizens.  In our US passports we have Ecuadorian visas which will not expire, allowing us to come and go with almost no restrictions.

Day Two: On the way to Chugchilan

Day Three: On the way to Quilotoa

How to Pray for Us? 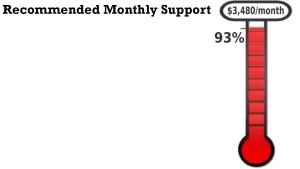 Scott and Jody have been married for 44 years and have six adult children and four grandchildren. Scott worked as a CPA for over 32 years and Jody was a homeschooling mom. They have been serving as missionaries in Quito, Ecuador since 2014.
View all posts by scottandjody →
This entry was posted in Ecuador, Missions, Unicycling and tagged Newsletters, unicycling. Bookmark the permalink.